What is inflammation? Causes, symptoms and treatment

Inflammation is the defense method used by the body to eliminate germs, harmful substances and dead cells. Infection can occur for many reasons, including infections caused by bacteria and viruses, chemical substances, or particles entering the body. Rapid onset and short-lasting inflammation is called acute; slow-moving and long-lasting inflammation is called chronic. Redness, swelling, pain, heat increase and loss of function in affected area are the main symptoms of it. Infections can be treated by antibiotics, anti-fungal and anti-parasitic drugs and creams. In case of chronic inflammation, anti-inflammatory drugs such as cortisone are used. Foods containing processed sugar and fats like margarine damage tissues and increase inflammation. Fiber foods like salmon, tomatoes, blueberries, hazelnuts and olive oil decrease risk of inflammation.

Inflammation is the defense method used by the body to eliminate germs, harmful substances, foreign particles, dead cells and tissues. It has many successive stages where immune system cells and blood vessels operate.

There are two types of inflammatory conditions: acute and chronic.

What is Cortisone? Benefits, Uses, Dosage and Side Effects

The causes of acute and chronic inflammation are different such as following:

What are inflammatory diseases? 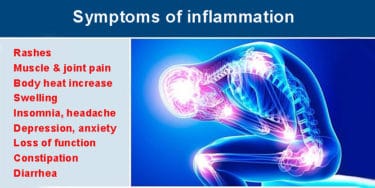 Inflammation does not always reveal these symptoms. Some inflammations occur invisibly. Symptoms of chronic inflammation vary depending on the disease. In addition to the above mentioned symptoms:

What is Crohn’s disease? Causes, symptoms and treatment

Complete blood count: What are the normal values of hemogram test?

Inflammation is a defense mechanism of the body. Some changes in the body may occur due to secretions from some cells involved in this mechanism. Symptoms such as pain, swelling create discomfort in patients. If these symptoms are excessive, they need to be treated.

The inflammatory process will end when underlying reasons are treated. The treatment processes of acute and chronic inflammation are different. Treatment options vary depending on the nature of the inflammation, the patient’s age, the drugs used, the general health status and the severity of the symptoms.

The most common cause of acute inflammation is infection. Microorganisms causing infection should be detected, and the appropriate treatment should be started. Acute inflammation can be accompanied by symptoms such as fever, phlegm, cough, pain, and runny nose.

Acute inflammation can be caused by acute exacerbations when the treatment of chronic inflammatory diseases is disrupted or when a triggering factor is encountered. In this case, acute inflammation causes and triggers should be reviewed and treated.

What is psoriasis? Symptoms, causes and treatment

Medicines used in the treatment of inflammation

What is ibuprofen? Uses, dosage, interactions and side effects

How to use painkillers? Types, risks and side effects

Change of nutrition to decrease inflammation is very important.

Plaquenil (hydroxychloroquine): Can it treat coronavirus? Side effects

If infection agents, which are among the causes of acute inflammation, are transmitted from person to person and cause the same disease in the infected person, the inflammation becomes contagious. For example, sexually transmitted diseases create infection. However, diseases with chronic inflammation such as rheumatoid arthritis are not contagious.

Chronic inflammation is among the causes. It is more common around 30-50 years old and in women. It may start with symptoms such as fever, weakness, fatigue, weight loss, joint pain. The most important symptom is morning stiffness. Stiffness in the joints after sleep or a long rest is called morning stiffness. Swelling occurs in many joints, especially in the hands and feet. Redness in the joints is not expected.

If there is redness, other diseases are considered. Inflammatory rheumatism may also cause damage to other organs such as the heart, lungs, eyes. This disease is a progressive disease that lasts for a long time and can cause permanent disabilities.

As a result of the destruction of the skin integrity, the process of inflammation begins on the skin. Symptoms such as redness, swelling, temperature increase and pain are observed in that area. Destruction of skin integrity may be caused by infectious agents such as bacteria or by exposure to chemicals.

There are several reasons why the inflammation process continues. It could be due to lack of proper hygiene and that the damaged skin gets into contact with other foreign bodies.

In addition, a disease such as diabetes that facilitates infection and wound formation also affects the process badly. A bedsore due to a long stay in bed after operations or diseases such as stroke creates a serious inflammatory wounds.

Acne is caused by obstruction of the sebaceous glands at the base of the hair follicles. In areas such as the face, back, and nape, acne occurs more frequently. Painful, swollen, large pimples are called inflamed acne. If these pimples take long to heal, traces may occur in the skin. When necessary, antibiotic creams and pills and vitamin A-derived pills are used for treatment.

What is Diclofenac used for? Dosage, interactions and side effects

Suggestions and warnings for inflammation