What is ischemia? Causes, symptoms and treatment of ischemic attack 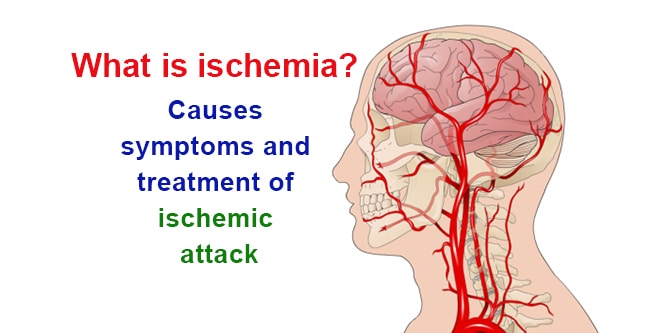 Ischemia is a serious condition in which blood flow to any tissue or organ in the body is reduced or stopped. During ischemia, one of the blood vessels providing blood and oxygen to the brain, is blocked. This congestion can be caused by blood clots, plaques or air bubbles. Interruption in blood flow prevents the function of organs. Therefore; may cause life-threatening problems such as heart attacks or strokes and symptoms such as speech difficulties, confusion, weakness in arms and legs. Smoking, excessive alcohol, high blood pressure, high cholesterol, obesity, diabetes and old age are the most important risk factors. People over 60 are more at the high risk.

Myocardial ischemia occurs when blood flow to your heart is reduced, preventing it from receiving enough oxygen. The reduced blood flow is usually the result of a partial or complete blockage of your heart’s arteries (coronary arteries). The brain, heart, legs and intestines can be affected.

The symptoms and treatment vary depending on the place where it occurs and the affected area of the brain. Transient ischemic attack is associated with loss of brain function in a restricted region, resulting in alarming clinical symptoms.

What is atherosclerosis? Causes, symptoms and treatments

What is Coronary Artery Disease? Symptoms and treatments

It is a condition where blood flow to one or more coronary arteries in the heart decreases and does not receive sufficient oxygen. Myocardial ischemia, also known as heart ischemia, can damage the heart muscle and reduce the ability to pump.

This sudden obstruction can lead to irregular heartbeat, heart failure and even heart attack, resulting in chest pain and sudden cardiac death. Symptoms usually go through rest or relaxation but are a medical emergency.

What is triglyceride? Why does it increase? How to reduce body fats?

Brain tissue is metabolically very active, and in order to function properly, the brain receives 20 percent of the blood pumped by the heart. Furthermore, brain has no energy stores of its own and is completely dependent on continuous blood flow to do its work.

The death of brain tissue is called stroke. Sometimes the blood flow is not long enough to produce an actual stroke. This condition is called a “transient ischemic attack” (TIA). TIAs are important not only because they are alarming in themselves, but also because they are often followed by a full stroke. Thus, TIAs always require immediate medical attention.

During ischemia, blood vessels providing oxygen to brain, is blocked.

It is a serious condition that occurs with plaque accumulated in arteries in the legs and can cause permanent disability if left untreated. The first sign of peripheral arterial disease arises from the hardening of the arteries that provide blood to the legs.

The most common symptom of limb ischemia, which may cause intense pain even when resting, is intermittent limping.

What is pulmonary embolism? Causes, symptoms and treatment

These symptoms are common symptoms of ischemia.

Signs of ischemia in the heart

If you have prolonged or severe chest pain, seek immediate help.

What is dyspnea (shortness of breath)? Causes, symptoms and treatment

Ischemia symptoms in the brain

Ischemia may persist for a short time and recover on its own, but intervention as quickly as possible is essential to avoid unreversible damage.

How does ischemia affect the body? What are the causalities?

Transient ischemic attack is a warning sign that you may be at risk of a stroke in the near future. Detailed medical evaluation is the best way to reduce this risk.

What is arrhythmia? Causes, symptoms, types, and treatment

Rapid diagnosis of symptoms is vital to diagnose the cause of ischemia and to decide on the treatment method. Tests for evaluating ischemia include:

Treatment depends on personal circumstances such as age and medical history. The first target in the treatment is to regulate the breathing by normalizing the heart rate and blood pressure. Depending on the severity of your condition, you may be treated with medications, surgery or both.

Complete blood count: What are the normal values of hemogram test?

Ischemic stroke is caused by a blockage due to the accumulation of fat and clot in an artery that supplies blood and oxygen to the brain. Requires rapid treatment; If not treated immediately, blood flow remains blocked, causing brain damage or death. If you think someone has had a stroke, consider the situation with the following in mind:

If the answer to these questions is yes, seek medical attention without wasting any time.

Rehabilitation may be required to regain motor skills and coordination after treatment. Professional, physical, and speech therapy help to restore other lost functions. If you still have a problem after a year, it will probably be permanent. Global ischemia, a more severe form of stroke, occurs when the oxygen flow to the brain stops completely.

What is muscle loss (sarcopenia)? Symptoms and treatment

It is usually caused by a heart attack, but other conditions such as carbon monoxide poisoning may also be the cause.

Transient ischemic attack (TIA): it is like a stroke that produces similar symptoms but lasts only a few minutes and does not cause permanent damage. Ischemic attack, also called mini-stroke, is temporary but a warning; increases the risk of future stroke. It is caused by a temporary congestion in the brain or a decreased blood flow. The deterioration in the blood supply results in a lack of oxygen in the brain.

It may cause sudden symptoms like stroke and visual impairment; drowsiness or weakness in the face, arms and legs. After a short time, the symptoms disappear and the blood flow returns to normal.

Blood clots that prevent blood flow are the most common cause of ischemic stroke and attacks. Blood clots can be the result of arteriosclerosis, heart attack or abnormal heart rhythms. The brain cells are affected within seconds after obstruction and cause severe symptoms in the regions controlled by these cells. Circulatory conditions are the main risk factor for ischemic stroke and transient ischemic attack:

Transient ischemic attack symptoms are similar to stroke and may start suddenly. Rapid assessment of treatable conditions can help prevent paralysis. If symptoms persist for more than an hour, there is a risk of stroke.

What is Cortisone? Benefits, Uses, Dosage and Side Effects

An organ exposed to ischemia is called ischemic. The ischemic organ starts to deteriorate as it does not get the oxygen and nutrients it needs, and this often causes symptoms. If ischemia becomes severe or lasts longer, the cells of the affected organ may begin to die. The death of all or part of the ischemic organ is called infarction.

After having an ischemic attack, it is more likely that another attack will recur. Knowing risk factors and acquiring a healthy lifestyle is the best thing you can do to prevent ischemia.